A/B testing is such an important step in product development because it’s directly tied to revenue.

Big data-driven companies know this. They run thousands of tests concurrently! They have teams that develop in-house systems for monitoring all these tests. It’s a massive part of their life blood. And for good reason: data science models and product enhancements can’t be considered improved unless they’re measured. And A/B testing is how that’s generally done. But like anything else, some companies get it right, and some don’t.

It’s really easy to waste a lot of time and resources on A/B testing. In this post, I’ll explain how typical A/B tests are performed, what they’re designed to do and show you how to make tests work for, not against your business.

And if you’re not yet testing, there’s no better time to start than now! Call us, we can help. After all, what gets measured gets managed, and A/B tests are ultimately just powerful measurement tools. (See part two of this article for a rundown of types of A/B tests and which perform best.)

I’ll assume you’re on board with the importance of testing. I’m glad that’s out of the way! For the rest of this post I’ll show you how to think about efficient testing. Testing that gives you the answers you need, quickly and automatically. First, we’ll look at how we usually see companies approach tests, then we’ll dive into a newer and more efficient method that can save you a lot of valuable time and money (i.e., impressions). Let’s dive in!

Let’s consider a very simple example: we have one product to show to customers who visit our website. Let’s say we’re selling bicycles. So, we dream up this landing page. We love it but can’t agree on the text. A perfect opportunity to A/B test. We’ll call A, “Bike to Work”, and B, “Win the Race”:

A/B tests generally require that we show option A to a lot of users and option B to different users. Then, after A and B have been shown to a LOT of users, we look at the numbers and say that A performs better than B. There are some details, like p-values and confidence intervals to consider. I won’t get into these here, but there are a few important details to this type of A/B testing:

Here’s Evan Miller to dive in a bit deeper and explain it perfectly:

If you run A/B tests on your website and regularly check ongoing experiments for significant results, you might be falling prey to what statisticians call repeated significance testing errors. As a result, even though your dashboard says a result is statistically significant, there’s a good chance that it’s actually insignificant.

OK, you’ve probably heard that before. But still, there must be a better way, where we can learn from each user visit (click) and get smarter as we go.

Wasting impressions is no fun and works against your business. So, in this document, We’re going to show you how you can do something much smarter, much faster, so you can stop wasting time and money on tests and spend more time doing what you’re best at: building great products!

It’s worth taking a moment to explain the name.

Let’s imagine you have a room with 5 slot machines, where each machine pays out at a fixed percentage of the time. You also have a bucket full of coins. How do you maximize your winnings?

This is the multi-armed bandit problem

The best strategy is to spend some time trying each machine (exploring) to see which one seems to be paying off more often, then playing (exploiting) the machine with the highest pay-off. But while playing (exploiting) the best payout, there’s still a chance that another machine would perform better, so the temptation is to wander around a bit more, trying the machines a bit more (exploring).

When should we stop? When have we explored enough to be confident that we can exploit the heck out of the one big-money machine? This is called the explore-exploit tradeoff dilemma and it’s exactly what the MAB algorithm solves for us! You can read a lot more about it here. This is also happens to be what Google uses for its experiments. They provide a great technical overview of A/B testing with multi-armed bandits. It’s a very well written article and I highly recommend reading through all the pages to get a good background.

In the rest of this article, we’ll show you why to use a MAB, when you should use one, and exactly how to implement one. Let’s get to it!

Why should you use a MAB?

Let’s paint an even bleaker picture of that first type of A/B testing (called the frequentist method). First we pick a null hypotheses, something like, B will not perform better than A. Then we pick some statistics significance we need to achieve (are you sleeping yet?). Call it 95% confidence. Then we need to run the experiment with, say 1,500 impressions per each option. If we have more than two options, things get much worse, and with four or five options, you could be running the test for YEARS to get enough impressions. Really, years! That costs money. Why? Because if one of the options is a dog, you’re losing money every time it’s shown or used! We can do better.

In contrast, let’s look at the MAB

In addition, MAB’s are extremely lightweight, as you’ll see later on in Implementation

How do they compare?

Let’s run an experiment. Let’s go back to our two landing pages, A and B. And since this is a thought experiment, let’s say we have lots of users, just waiting to see them.

We’re going to run a usual (frequentist) A/B test and the MAB (probabilistic) A/B test. You don’t have to do a thing. Just wait right here; I’ll fire up Python and run this experiment.

Here are the details:

For this method, the first thing we need is the number of times to show A and B each. So, we go to this page and see that for the given criteria, we need to show each variation 1,600 times! (I had underestimated. It’s worse than I thought!) 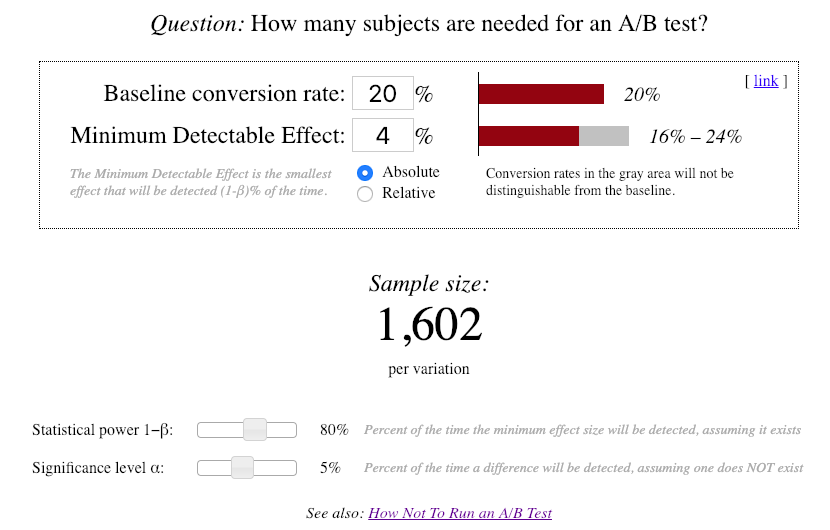 At the end, we expect to waste some money by showing impressions of B, when A is clearly the better option, since its click-through rate is 35% higher.

Now, please put your feet up and make yourself at home while I turn the crank on the machine…

OK, I’m back with the results:

CASE 1: The first case is trivial to compute. Since nothing can change, we can simply state that:

Take-home: If we had shown version A every time, we would have received 560 more clicks! But remember, we had to go through 3,200 clicks to get to this conclusion confidently.

That number, 560, is called our regret. Bluntly, regret is how much we lost by showing the “bad” option. It’s defined as the total possible reward minus the observed reward. Since we can peer behind the curtain, we know that showing all 3,200 users option A would have had a 45% click through rate, or 1,440 clicks. Our regret is just 1,440 minus the actual number of clicks.

560 lost clicks is pretty severe. Clearly we want to minimize the regret of showing the wrong option. MAB’s are designed to do just that. Let’s take a look at case 2 and see what the MAB can do!

CASE 2: The multi-armed bandit requires a simulation environment. In this environment, we show each ad until a winner is chosen by the algorithm, then we stop the test since we have a winner. In this case a winner is the bike ad, A or B, that we want to show for the rest of the experiment. I simulated this by running the experiment 1,000 times. Here’s are the results:

This is exactly why MAB’s are so lauded.

As with any testing platform, be there are some important things to remember when using MAB’s

MAB’s work really well when our pool of users is consistent. It might be obvious, but if in the middle of our 3,200 user study we suddenly change our marketing channel (say, to bike racers who don’t commute), it drastically alters the underlying assumptions. In this case, it’s best to stop the experiment and re-start with a clean slate for this new demographic. The take-home here is, any time user demographics will vary widely, make your data professionals aware of the changes!

We’ve seen how the MAB algorithm can outperform standard statistical A/B tests. And for A/B/C/D, etc tests with lots of options, in some cases standard tests won’t finish for years, where a MAB would converge in days. MAB’s are:

Ready for more? Here’s part two, where we discuss the most effective methods for A/B testing using MABs.

The Smart Marketer: When to Use Multi-Armed Bandit A/B Testing: https://www.retentionscience.com/blog/multi-armed-bandit/