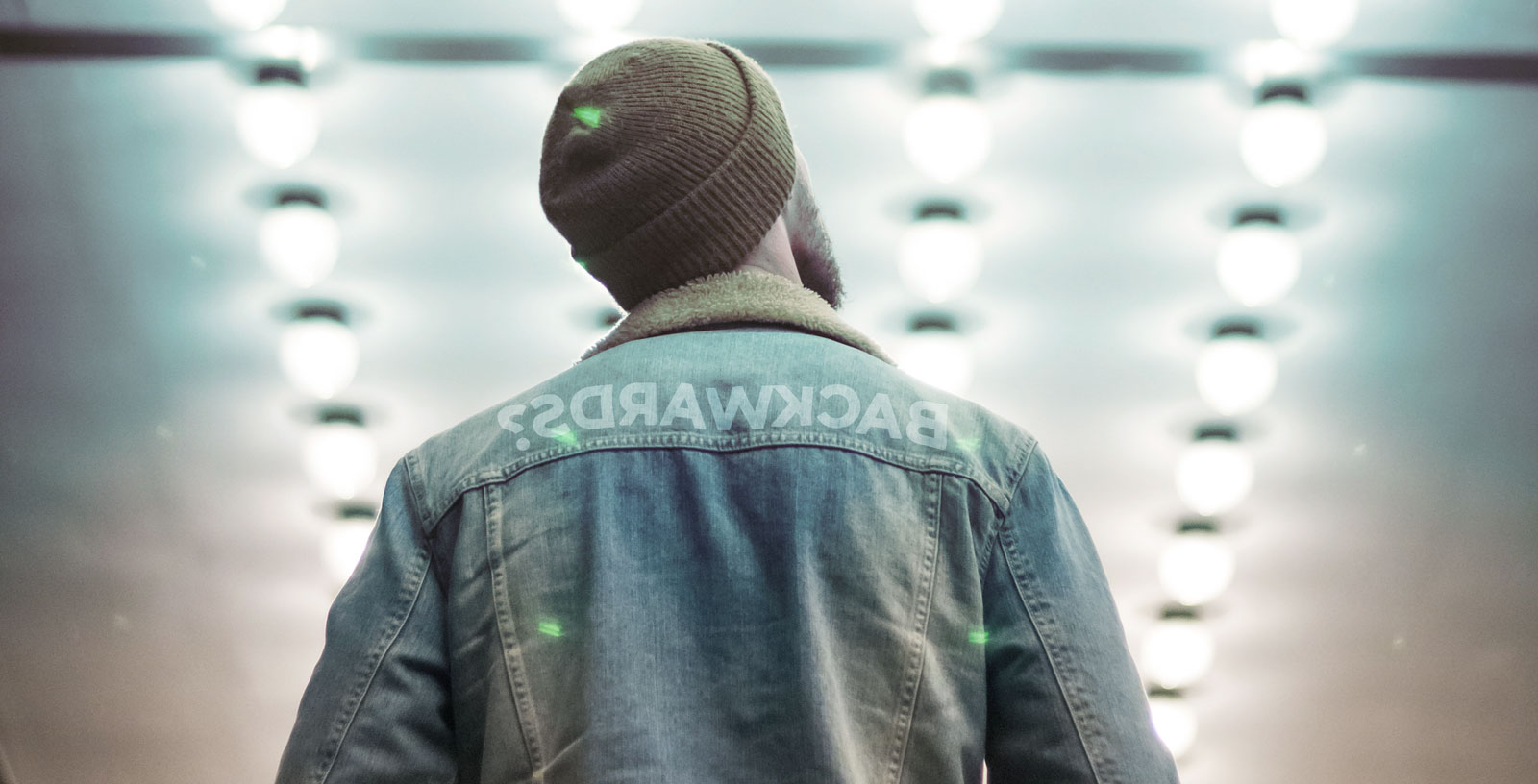 Do you Have AI all Backwards?

I learned a new acronym today, IA. Here’s the story, what it stands for, and why it’s important to your business.

I had a very interesting talk today with the esteemed UCSD professor, Yoav Freund, who, among other things was one of two scientists who won the 2003 Gödel Prize for their work on formulating the AdaBoost algorithm. He’s quite a person: kind, and always easy to talk with. But what I like most about Yoav is his passion for the work he does.

We talked about the big progress scientists made over the past several years. In particular, I remarked how AI was achieving stunning accuracies in detecting tumors or metastases in breast cancer patients. I noted that AI is much better than humans at detecting the anomalies. From the paper, in fact, Google shows their method, called LYNA, has an accuracy (AUC) of 0.99, which in any detection algorithm is phenomenal. From the Google paper:

LYNA was able to correctly distinguish a slide with metastatic cancer from a slide without cancer 99% of the time.

Here’s a picture from that paper:

That’s when I made a logical leap I think a lot of us make, and certainly one that people talk a lot about: perhaps with minimal supervision, computers could really solve this (cancer) detection problem for us. Then perhaps even take the jobs of radiologists, whose eyes couldn’t do what AI has been shown capable of. Only, that viewpoint misses an important part of the story.

Sometimes it can start to feel like AI has only two options:

That’s when Yoav told me about the notion of IA (yes, it’s just AI backwards!), which stands for intelligence amplification. It’s really a “thing”. And by that, I mean, it even has its own Wikipedia Page. Yoav pointed out that AI isn’t being developed to take the jobs of all the radiologists around the world and replace them with shiny robots who coldly provide hyper-accurate diagnoses. Rather, it’s being used in many cases to amplify the intelligence of the doctors to make them more efficient. This is a fundamental shift away from how I believe most people think about AI, and it makes perfect sense. It’s something I see every day; people being assisted by AI, not being ruled our ousted by it.

Getting back to the case of the Google study, the word assistant is right in the name of the technology, LYNA – Lymph Node Assistant.

The paper goes on to mention that

Google calls LYNA an “assistive technology” (emphasis mine). This is an important difference between our sometimes doomsday view of AI where powerful robots are making autonomous decisions and where AI is very effective, assisting humans to be more efficient or intelligent in what they do.

Look at Google Search for example – Can’t remember the Spanish word for cat? Google it. Gato! It’s just assisted recall. How about Google Assistant or Siri or Alexa? These are all tools to help us achieve intelligence amplification (IA). These services, instead of being intelligence replacements, are drastically extending what the mind human mind is capable of.

How does AI / IA apply to business?

AI requires data. Lots and lots of data. Intelligent systems to recognize faces or voices require millions of training examples. You can think of it like a child learning. Before a human can speak and communicate clearly, years are required. Think of all the signals going into all the receptors of a small child. And it still takes years. This is the sort of data mountain AI needs to climb to reach an acceptable accuracy level. 90% accuracy on voice recognition is horrible. 95% is usable, but the jump from 90% to 95% requires a lot more data and highly optimized algorithms.  To put it in perspective, 90% accuracy means one out of 10 words is wrong. At 95%, it’s one out of twenty. Just image re-reading this text with one out of every ten words replaced by a random word.

Just take a look at how long it took Google to get to human-level accuracy: 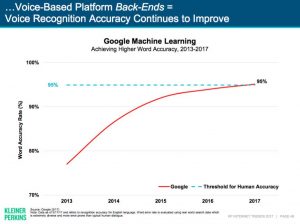 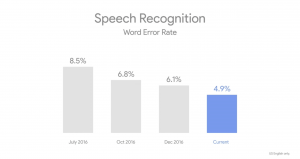 This clearly shows that these AI systems need more data than most companies will ever have. AI is not for everyone, yet there are many different models used by medium and large companies every day that don’t leverage AI, per se, but do rely on predictive analytics. These are found in churn models, product recommenders, and a myriad of other applications. This is where the notion of IA comes in.

Rather than a behemoth AI system, think of Intelligence Amplification as a lighter-weight cousin. IA can help workers make decisions faster and in a more informed manner. Instead of asking a salesperson to detangle and prioritize a list of 5,000 leads, how about using a list ranking algorithm to produce the top-100 most qualified? In a way, Netflix operates like an IA system; instead of Netflix showing you the one movie they think you should watch, the narrow down the list of thousands to just a handful. Without this aid, it would be nearly impossible to find anything to watch.

There’s a lot more gray area to predictive analytics than we might always consider and sometimes it takes the nudge of an expert like Yoav to provide a fresh perspective; The black and white view of AI as either a menacing tool that will take over or as the panacea to all our ailments falls short in many ways. Intelligence amplification gives us a way to consider predictive technologies as tools for us to use that perform better than our minds alone, and continually improve as we need them to.

Finally, since we were talking about voice recognition…

If you want to have some free fun, you can see how good it is by clicking here and trying it yourself. 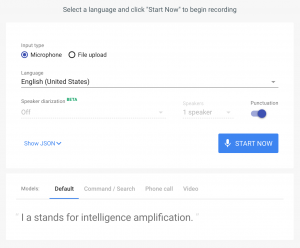