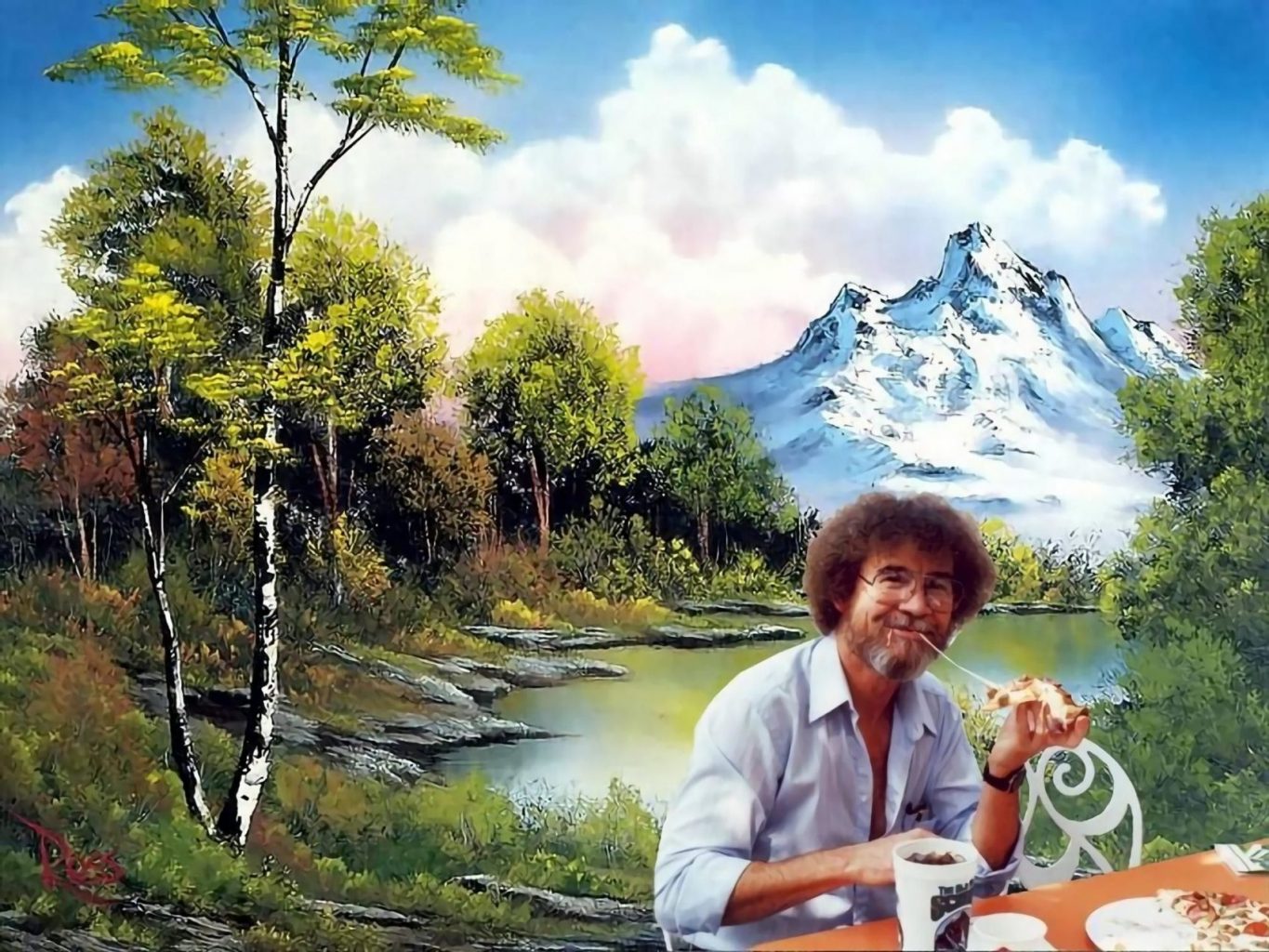 Remember Bob Ross… the wonderful landscape painter on TV with an infectious smile whose deep, soothing voice guided many a viewer into the world of painting using easy-to-follow, quick, wet on wet oil painting techniques that make painting seem effortless and therapeutic?

When asked about his relaxed and calm approach, Ross said, “I got a letter from somebody here a while back, and they said, ‘Bob, everything in your world seems to be happy.’ That’s for sure. That’s why I paint. It’s because I can create the kind of world that I want, and I can make this world as happy as I want it. Shoot, if you want bad stuff, watch the news.” (source)

In line with his approach, this week’s Tech Tuesday will talk about something lighter than usual and certainly lighter than the news of late: the recent boom in interest for Bob Ross and some really interesting statistics about his art!

Ross passed away on July 4th, 1995. His death predates Google trend history, which started in 2004. So, here’s how Ross has trended since then: 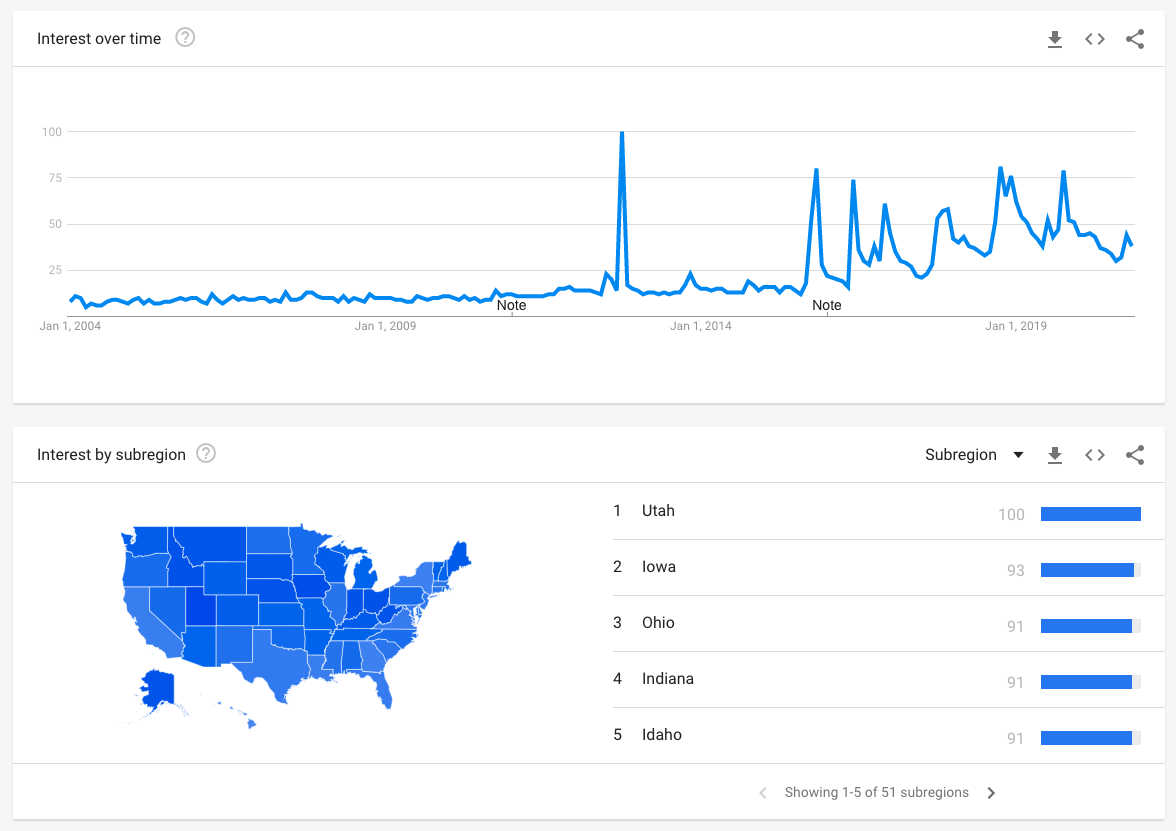 As you can see, interest in Ross started increasing since roughly August 2015 and trended higher in four-letter states (true, but I’m really only having a little fun with this one).

That spike you see in 2015 was when Google paid respect to Ross on his would-have-been 70th birthday with the following “Doodle”:

In 2014, FiveThirtyEight created a statistical analysis of the work of Bob Ross. Here are some of the take-aways: 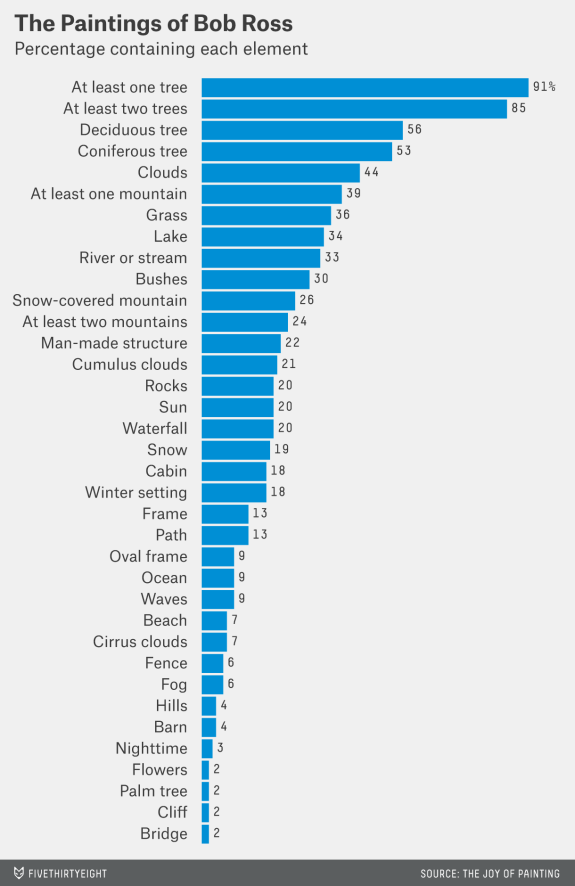 And this analysis used a dimensional reduction technique called principal component analysis (PCA) to uncover the factors that describe the biggest differences in Ross’s paintings. As you might expect, trees are opposed to ocean scenes, mountains are opposed to structures, and winter scenes oppose grass and rivers.

Particularly in uncertain and difficult times like these we can all use a bit more of Ross’s positivity and reassurance: “Ever make mistakes in life? Let’s make them birds. Yeah, they’re birds now. To err is human. Forgive yourself. Let your mistakes fly away. On a canvas, or out of your life. Just let it happen, don’t fight it.” (source)

You can read more here or watch a documentary on him here.

I hope you learned something interesting about Bob Ross in this Tech Tuesday and start the day with a smile. Happy holidays to those of you celebrating this Thursday!

New Algorithm Provides 50 Times Faster Deep Learning
Using algorithms derived from neuroscience, based on a principle of the brain called sparsity, A.I. research company Numenta has achieved a dramatic performance improvement in deep learning networks, without any loss in accuracy. Their breakthrough is also vastly more energy efficient. Have a read here!

A.I. is Wrestling With a Replication Crisis
Science is built on a bedrock of trust, which typically involves sharing enough details about how research is carried out to enable others to replicate it, verifying results for themselves. This is how science self-corrects and weeds out results that don’t stand up. Replication also allows others to build on those results, helping to advance the field. Science that can’t be replicated usually falls by the wayside, but this seems to be a growing trend in A.I. research and growing numbers of scientists are pushing back against a perceived lack of transparency. Read more about this issue here.

World’s First Production Car With ‘Eyes-Off’ Self-Driving Tech
Honda has received regulatory approval from the Japanese Ministry of Land, Infrastructure, Transport, and Tourism (MLIT) to begin selling vehicles equipped with Level 3 autonomous driving. In a press release, Honda shared that it would begin the sale of the Honda Legend equipped with its all-new “Traffic Jam Pilot” feature by the end of the company’s fiscal year (March 31, 2021). Would you give it a try? Read more here.